If you are thinking to buy a new and powerful sliding compound miter saw, don’t take any rush decision. Before going for another option, read my story how I got DEWALT DWS780 the King of Miter Saws and why I had to replace my old one.

Why I changed my last sliding miter saw?

As a professional carpenter, I was facing a problem with my previous miter saw Dewalt DWS709. Whenever I was with a bevel cut at a deeper angel, my miter saw could not provide me the subtle cutting experience. And it resulted in the dissatisfaction of my customers because they were demanding a more precise cut. I was looking for the solution. Already it could harm my business a lot.

One day I was visiting one of my friends’ shop who was doing better with his business than me. I found him busy with a bevel cut with his miter saw. Wow! I couldn’t but be amazed at the precise cutting result. It was the performance of Dewalt DWS780.

I could feel how he was boosting up his revenue. I got the solution of my problem. So, I did not make any delay to get my new problem solution master Dewalt 780 and from then my customers are happier than before.

Though Dewalt DWS780 cost me more than Dewalt DWS709, the saw could also increase my revenue making happy my customers. And it could persuade me to write a review on DEWALT 780 12-Inch Double  Miter Saw. 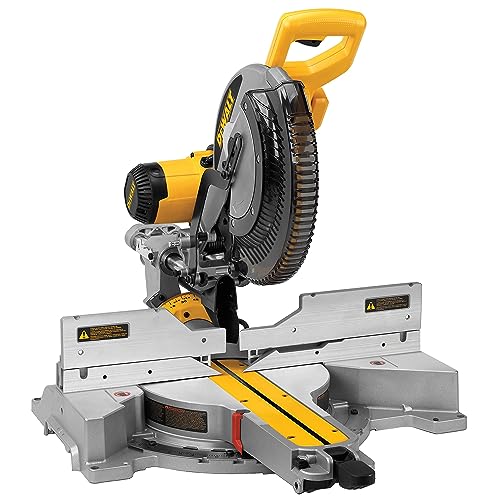 As I was impressed with this saw at the very first sight and experiencing the amazing performance with its bevel cut, the design of this saw was not a concern for me. But after a while, I noticed that the saw came with a royal design enriched with some versatile features like cutting LED light.

The only thing from which I was suffering from my old saw was an accurate cut. And The Dewalt DWS 780 came as my savior. When I was doing bevel cut, I could cut a full 48-degrees bevel to both sides’ right and left. And the cutting accuracy? It was unparalleled comparing to my old meter saw. It was more than accurate and subtle.

And adjusting the bevel angle was an easy task for me. I could simply do it losing the bevel lock knob and rotating it to my desired angle, and then tighten the lock knob to start the cut.

When I was going on with my miter cut, I found it was very simple to use as it could be done just pressing the button in front of the handle. And the miter could allow me to go up fully to the 60-degrees to the right and 59-degrees to the left for my cut. And the cut was simply accurate and smooth.

The thing which can claim the sole credit for my accurate cutting result is the cutting LED work light. While cutting, I could find the light was casting a shadow of the blade and its teeth onto my board which could help me to run the blade through the exact cutting line.

And I think this the reason I could get precise and accurate cut whether it was with my miter cut or bevel cut. Really this is a handy feature.

This is another cool feature because it could allow me to control the depth stop that means it can help me to determine how deep the blade will cut. And you can also do it easily just adjusting your desired cut depth.

And the dual-bevel system of the saw is designed in such a way that helps to get the easy angle adjustment with accurate scale visibility.

When I came up with The Dewalt DWS780, the thing that could also draw my attention is its easy and simple use. Just pulling the trigger, I could let the blade a full speed for the cut. Then lowering down the saw to the board, I could just push the saw back to start the cut. And I found the rails of the saw were moving smoothly.

While using my saw, I could notice my hand did not slip from the handle even for a single time though I was using the saw for more than one hour.  And this engrossing feature came up with the handle because of the handle designed ergonomically which also brings a comfortable carry with the saw.

As the saw has come up only with a weight of 56 Ibs and a comfortable handle at the counter-top, I can easily carry my saw when I go for an outer workforce.

The Dewalt DWS780 has come up with a motor of 15-amp capable of delivering 3,800 PRM which is powerful enough for the durable operation and superior cutting capability. The motor has been assembled with the heavy parts which will ensure the frequent use at your workplace without any hassle for a long time as it is doing in case of me.

The Features that Could be More Efficient

The dust collection bag adjusted with my saw works pretty well but I need to empty the bag frequently as the bag is a little bit small.

And therefore, sometimes, I had to compromise with the dust around my saw while cutting only for its major features like the precise and accurate cut. Otherwise, I could flip it out but I could manage it using a vacuum.

Another thing that could be improved is the table provided with the saw. The table is very small but it rotates nicely without any hassle.

The saw blade I got with my saw could be more efficient and feasible. It could not provide me a fine cut as it was tearing out my cutting materials. So, I had to get an upgraded blade with finer teeth from the market.

Are you struggling to choose between Dewalt DWS780 vs DWS709 ? Don’t worry. Here is my deep review for you on Dewalt 780 vs Dewalt DWS709 which will certainly help you to pick up the right one.

The Dewalt DWS709 12 inch is a double bevel sliding compound miter saw powered by a 15Amp motors which can run at a maximum speed of 3800 RPM under a no-load.

When you will be with your miter, you will find the saw can miter or angle up to 50 degrees for the left and 60 degrees to the right side with a finer cut and you will get 13 positive miter detents throughout the angle range. And with your bevel cut, you can use the bevel 49 degrees to the left and right easily with an accurate cutting result. The special back fence will allow you to cut straight down at 90 degrees measuring 2×14 lumber and you can go up to 45 degrees through 2×10 lumber work material comfortably.  And horizontally, the saw can cut 9.5 inches at 90 degrees and 6.5 inches up to 45 degrees, also with cutting crown molding up to 8 inches width material.

There is also a dust collection system with a dust bag but for better performance, you need to use a vacuum.  And the saw comes with a three years limited warranty with some other accessories such as 32 teeth carbide blade, a blade wrench, and a material clamp.

Dewalt DWS780 is the best 12 inch sliding compound miter saw with a 15 Amp, 3800 RPM powerful motor. With your bevel cut, the saw will allow you to cut 48 degrees bevel to both left and right. And with the miter cut, you can adjust the miter at 50 degrees to the left and 60 degrees to the right. The saw can cut up to 2×16 inch at fully 90 degrees angle and 2×12 inch at 45 degrees angle.

This saw also comes with 3 years limited warranty with other accessories like a dust bag, a small table, a vertical material clamp, a 60 teeth blade, and a blade wrench.

if you compare Bosch vs Dewalt miter saw Both are popularly known as powerful miter saws to the carpenters or any professionals. It is because both saws can deliver excellent miter as well as bevel cutting result with an advanced accuracy. And these two saws have come up with so many amazing cutting features to make your work simple and complex cutting easier.

So, it is pretty difficult to choose the best one for these two. But, if you come up with the popularity of these two saws to the users or the professionals, then, Dewalt DWS780 is many steps ahead than Bosch 12 inch compound miter saw.

Which one better for you?

So, if you are a professional and needs to deal with your large projects, then The Dewalt DWS 780 is the best option because it will bring you more precise cutting result to make your customers happy being worth the extra cost with its price.

But, if you are with a small project or needs to deal at a tighter workplace and carry it out, then it would be wise to get The Dewalt DWS709.   Click Here to Buy from AMAZON

If you are in urgent need of getting an accurate and precise cutting result with your sliding miter saw, then I can suggest you to go for the Dewalt DWS 780.